In the previous article I posted a full nearly 3 hour presentation by Dutch actor George van Houts on 9/11. In the next series I will aim to do something that many conspiracy believers may find surprising and even resentful: Debunk many of his claims. Surprising, because I have been painted as a conspiracy thinker as well by the media, even nuts and mentally unstable. This is of course based on my work in the JFK case and the Vaatstra case, which in my view are clear-cut conspiracies based on the facts. Facts that have consistently been concealed by the culprits. Therefore I maintain (probably in vain) that I am not a conspiracy theorist at all, in fact I refrain from dealing with theories, but rather with facts.

Let me first emphasize that George van Houts no doubt means well and his intentions are sincere. But as often the case with conpiracy theorists they often fall in love with their theories, to the extent that they tend to neglect and ignore evidence to the contrary. I firmly believe that many of his suggestions and claims are simply not true, but could stick in the minds of many, because of the lack of counterevidence provided. I think that is unfair. Therefore I will try to address and answer a number of questions in random order, such as:

Let me start with the first question by posting the above clip. Moreover it would be fair if George shows a few actual pictures of this crash site, not just one that pleases his theory. Anyone can find many pictures by doing a Google image search:

This shows there is considerable more debris than George suggests, including recognisable parts of the airplane. It is not at all uncommon that an airplane almost competely disintegrates upon high speed impact, beyond immediate recognition. Dutch citizens may recall the crash of the 1992  Bijlmer disaster, a Jumbojet 747, a plane that is almost 3 times heavier than a 757. 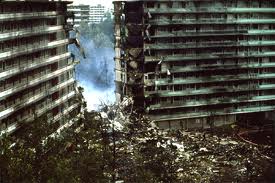 People that would not know, could hardly tell that a Jumbo crashed here.

Next: Did something else than American Airlines flight 77 (a Boeing 757) hit the Pentagon?